In this week's blog, Ciarán Nugent looks at the effects of the Coronavirus on young workers. 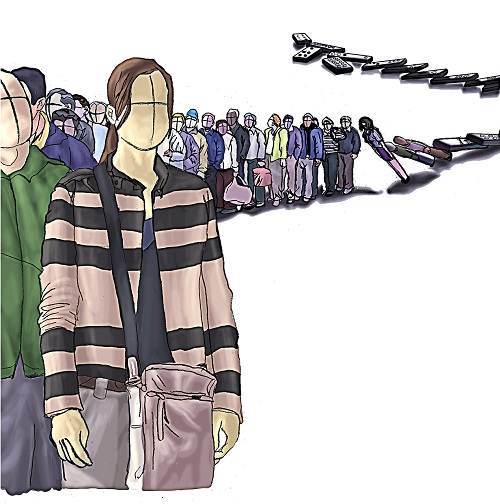 Though no official figures have been published, the Irish labour market has already felt the shock of the Coronavirus. A recession is inevitable. This is a much more rapidly changing situation than that in 2007. In the past week or two an estimated 120,000 jobs have been lost in hospitality, 20,000 in childcare and Retail Excellence Ireland have forecast an additional 200,000 job losses over the coming weeks, coming to 340,000 from total employment of 2,252,000. By the middle of last week, 58,000 applications had been received for an emergency Jobseekers payment. To put that in perspective, in the first year of the great recession between the third quarter of 2007 and the third quarter of 2008 employment in Ireland fell by 43,000. By the first quarter of 2009 job losses reached 180,000. It took over three years to the final quarter of 2010, for employment losses to equal 140,000.

If this were to come to fruition it represents a 15 per cent contraction in employment to 1,912,000. Employment hasn’t been as low since the first quarter of 2013 and wasn’t much lower at the very bottom of the recession (1,880,000 in Q1 2011). Seven years of near uninterrupted employment growth, reversed in a matter of weeks.

Over the past number of years the NERI have produced several research papers highlighting the fact that the Irish labour market never fully recovered from the financial crisis and that the burden of unemployment and growing precariousness post-2008 have been most deeply felt by younger citizens. Living standards for young people had still not recovered by February to where they had been for years leading up to 2008. Average wages had just about recovered to pre-crisis levels by 2017 (there is a lag with available wage data by age) but participation rates remain much lower, precarious forms of employment are more prevalent and deprivation rates for young workers are still elevated.

It is likely that young citizens will again bear the brunt of the coming contraction.

So far, the anecdotal evidence suggests that the bulk of losses will be felt in Accommodation and Food and Retail. The former is the lowest paid sector in the economy by a large margin and Wholesale/Retail is among the lowest. Jobs in these sectors are more likely to be precarious. 36.2 per cent of Wholesale/Retail workers under 40 work part-time and in Accommodation and Food it’s 43.8 per cent with 22 per cent of young workers on temporary contracts. Workers will be least likely to have savings to buffer the crisis and more likely to have excessive rent payments coming due.
The share of employment for workers under 40 is 27.1 per cent between the two sectors (2018). At 15.7 per cent Wholesale/Retail is the largest sectoral employer for under 40’s whilst Accommodation and Food is third largest at 11.3 per cent. This compares to employment of just 16 per cent in the two sectors for over 40’s.

Accommodation and Food employed approximately 179,000 people at the end of 2019. A loss of 120,000 (70,000 restaurant workers and 50,000 pub workers) as reported by RTE last week would represent a contraction in the sector of two-thirds of employment! The latest figures show that about 68.4 per cent or 122,436 are under 40. Losses will probably occur more frequently for younger workers, but let’s just say for the time being that job losses will be felt the same across age groups. A conservative estimate, therefore, is a loss of 80,000 jobs in the sector for under 40’s. This represents an approximate doubling of the number on the live register for that age bracket in the space of a couple of weeks from just one of thirteen economic sectors (approximately 80,000 people under 40 were on the live register in February 2020 out of 182,000). In the Wholesale/Retail sector about 55 per cent of employees are under 40. Assuming again a uniform distribution of job losses across age groups, 200,000 job losses translate to a further 110,000 job losses for this group.

These workers often live paycheque to paycheque and a sudden drop in income will result in even more precariousness for this group. Almost half (47.6 per cent) of Accommodation and Food workers under 40 were renting in 2018 as were 31.8 per cent of the same group of Wholesale/Retail workers. That’s about 185,000 workers. Underemployment is an issue across these groups already. In 2018, a quarter of shop sales assistants and childcare workers wanted more work more hours and 31 per cent of bartenders were in the same position suggesting huge problems of wage sufficiency in sectors and occupations vulnerable to the coronavirus crisis even before the crisis.

The government just announced a 70 per cent wage compensation scheme for retained workers earning up to €38,000 p.a up to a maximum of €410 a week. Last week, both the NERI and IBEC called for a 75 per cent scheme. This may sound expensive but weighed against the alternative it is a no-brainer. The package would cost an estimated €4 billion or 1.2 per cent of GDP. To put that in perspective, in 2019, the Irish government collected €1.4 billion more than they had expected in revenue and a total of €23 billion in income tax alone. The state has €26 billion to draw on through the National Treasury Management Agency. With job losses, income tax revenue will fall and welfare payments will increase. Subsidizing wages will slow or curtail a downward demand spiral and ballooning welfare costs and should be treated as an investment in maintaining economic activity through a short-term economic crisis to avoid a more detrimental and longer lasting one. With borrowing costs at or near zero, the case is clear. Assuming this is truly a short-term crisis with normality back in couple of months, every penny spent is money saved in the long-run.

Current proposals in the US to support incomes of one-off cheques of €1000 or €2000 are relatively weak. Morgan Stanley and Goldman Sachs have estimated a contraction of between 24 and 30 per cent in American GDP in this quarter alone.

Even with income supports of 70 per cent, we are likely to see significant displacement and a rise in homelessness for these workers from this downturn when rent comes due. As this group also tends to spend every penny they earn there will also likely be a significant loss in aggregate demand across the economy which will likely spill into the likes of Construction, Manufacturing and Finance. It may also be the case, that even at a cost of 30 per cent of wages, many employers will opt not to keep on employees. This is likely in the Accommodation and Food sector for instance, where many expect a long-term contraction. The decision to make an exception and to pay childcare workers up to 100 per cent of their wages is likely a recognition of this problem and an attempt to minimise disruption to vital workers and a vital industry, which will need to be functional when we return to normality.

I pointed out the generational divide in voting patterns in the last election and across the global North in my previous blog. I argued that it could be explained, at least in part, by living standards and the labour market for younger citizens since the great recession. To quote Milton Friedman, when a ‘crisis occurs, the actions that are taken depend on the ideas that are lying around’. With forecasts of a possible 30 per cent unemployment rate in the US and Donald Trump signalling openness to radical ideas such as Universal Basic Income (a concept, which three weeks ago was pie-in-the-sky), at the same time as Boris Johnsons’ Conservative government guarantees 80 per cent of wages for those missing work in the UK there has already been a paradigm shift. Germany is even suspending its balance budget policy to tackle the crisis and the Irish government has drafted beds in private hospitals into the public system and is paying childcare workers.

This may represent an implicit acknowledgement that those younger workers whose lives were put on hold in 2008 and those who entered a precarious labour market after that have little patience for shouldering the burden of adjustment for a second economic crisis. Policymakers may finally be learning the real lessons of the past decade and the upsurge in ant-establishment support and are keen not to fuel it further. The last couple of weeks have also shown quite clearly to anyone stuck at home with only the internet to entertain them; if government has the will, it can mobilise resources. This runs directly contrary to the dominant mantra of the past decade. Think Housing, Childcare, Health, a Green New Deal. Without appropriate protections and a labour market that can provide security and a decent standard of living, we will likely see the appetite for change accelerate further from a generation left behind.

The ideas currently lying around and being implemented in this crisis; fiscal flexibility, universal income, universal services, rolling back privatisation and state-intervention.