Economic inactivity has long been seen a structural weakness of the Northern Ireland economy but a closer look at the figures shows an even bigger problem south of the border.

Yesterday the seasonally adjusted rate of unemployment in Northern Ireland (NI) was recorded at 2.4% in the last quarter of 2019. While this is one of the lowest rates ever recorded in NI it is actually slightly up on the rate of 2.3% recorded in the three months that ended in November 2019. Looking at the Republic of Ireland (ROI), the latest results from the Labour Force Survey there show that the seasonally adjusted rate of unemployment was 4.5% in the last quarter of 2019. The last time the rate was this low in the Republic of Ireland was in the final quarter of 2005.

These statistics show that the legacy of the 2008 financial crisis is still evident in the consistent gap between unemployment rates on the Island of Ireland. At the height of the crisis, unemployment reached 15.9% in ROI in the first two quarters of 2012. By comparison, the highest rate of unemployment in NI was 8.3% in the three months ending in January 2013.

However, it would not be wise to look at these labour market indicators in isolation. We know that in NI, the rate of unemployment cannot be understood without looking at economic inactivity. Indeed, NI has the second highest rate of economic inactivity of all of the UK’s 12 regions and is over 5 percentage points higher than the UK.

Economic inactivity is calculated as the percentage of people aged over 15 who are not in work, but who are also not looking for work. This includes students, retirees and the long-term sick.

A cursory glance at the figures suggests that the picture on economic inactivity is slightly better in ROI than it is in NI. Looking at the last quarter of 2019, the economic inactivity rate was 37.3% in ROI compared to 39% in NI. As the chart below shows, the ROI rate of economic inactivity had been falling up until the crisis, when it increased, and is still not back to where it was before. My colleague Ciarán Nugent has written about this here. 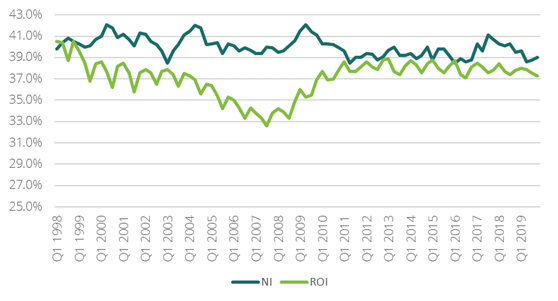 Looking at ROI and NI then it could be said that while unemployment in NI is lower, economic inactivity is higher. However, that very much depends on how you calculate economic inactivity. In order to get a full picture of both economies on the island of Ireland it is necessary to present labour market data in as accurate a comparison as possible.

However, in theory the labour force and overall population can be for working age adults or all adults. This presents up to four populations that rates can be calculated against and in essence up to four separate rates for each measure.

As the table above shows, the working age adjustment makes almost no difference to rates of unemployment and employment that are calculated as a percentage of the labour force. However, when we look at the overall population rates, a fairly big difference emerges.

In terms of economic inactivity, ROI has a lower rate than NI when calculated as a percentage of the overall population, but the opposite is the case when we look at the working age population. The same is true with the employment rate.

The problem here is that if one was to examine the difference between the officially reported employment rates in the UK and ROI, the bottom right of the table shows the rates to be 76.5% and 70.2% respectively. Looking at the officially reported unemployment and inactivity rates wouldn’t show where the actual gap is. Looking at the unemployment and inactivity rates in the bottom right of this table would.

Looking at the statistics broken down by gender shows a significantly larger gap between males and females in ROI than NI. The age breakdowns presented are not an exact match but it is quite clear that the trend is for an increasing gender inactivity gap as age increases. This has important implications for policies like childcare which is clearly an issue with female participation in the labour force.

What all of this shows is that when comparing the labour market on the island of Ireland, we can say that unemployment is higher in ROI. However, while economic inactivity has been a matter of debate for some time in NI, it is clear that it is now a bigger problem in ROI.

[1] The ROI figures are actually now presented as a % of those aged 15-74 following a Eurostat regulation that changed the rate from 15+. The CSO remark that the modification affected a minimal change on the unemployment rate.